QV Expert Skincare and Moisturisation in Every Drop 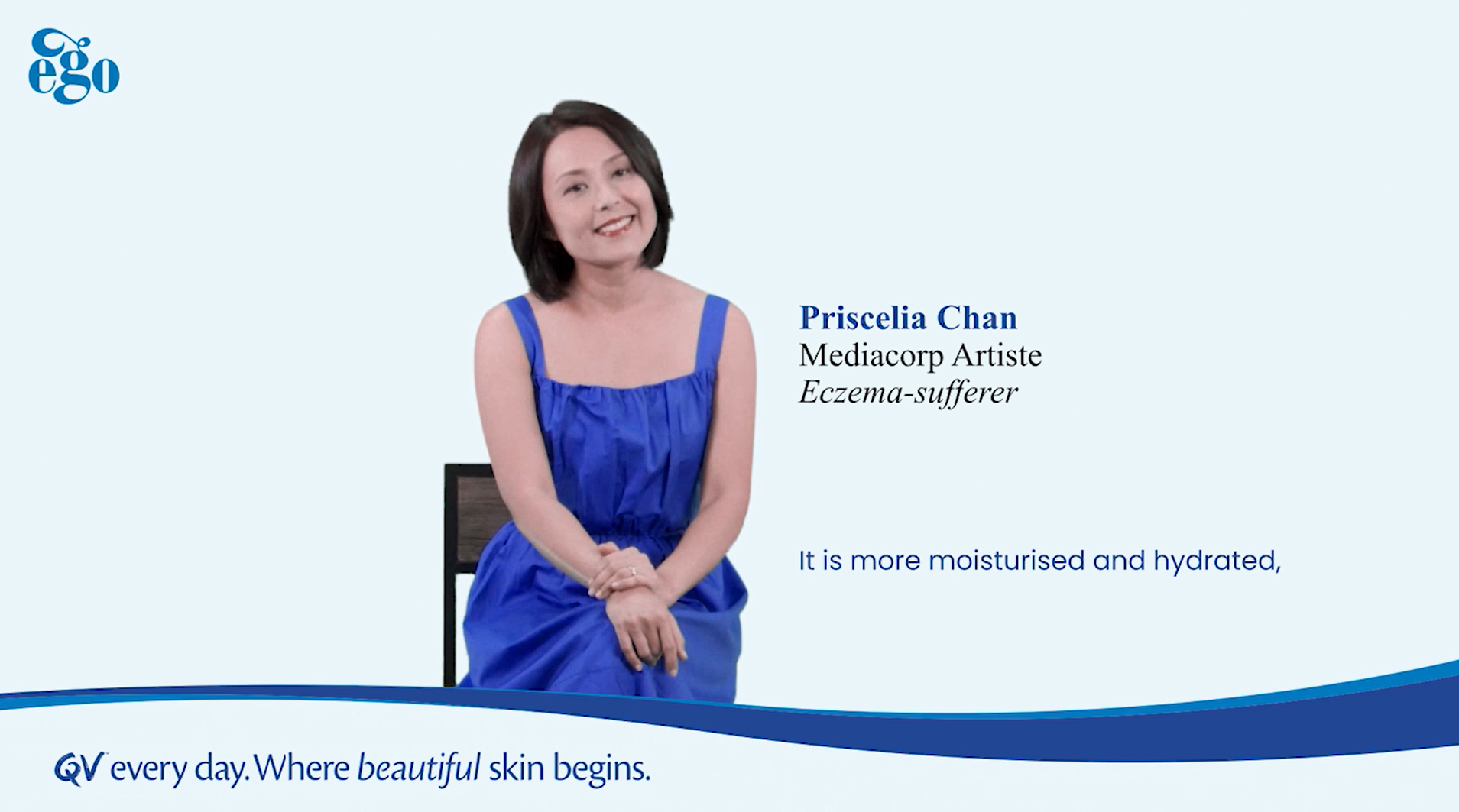 Priscelia rediscover herself and what matters most to her:

Since discovering QV Gentle Wash and QV Cream, Priscelia's skin has stayed more moisturised and hydrated, and they have  helped her on her journey towards recovery and being her cheerful and happy self again. 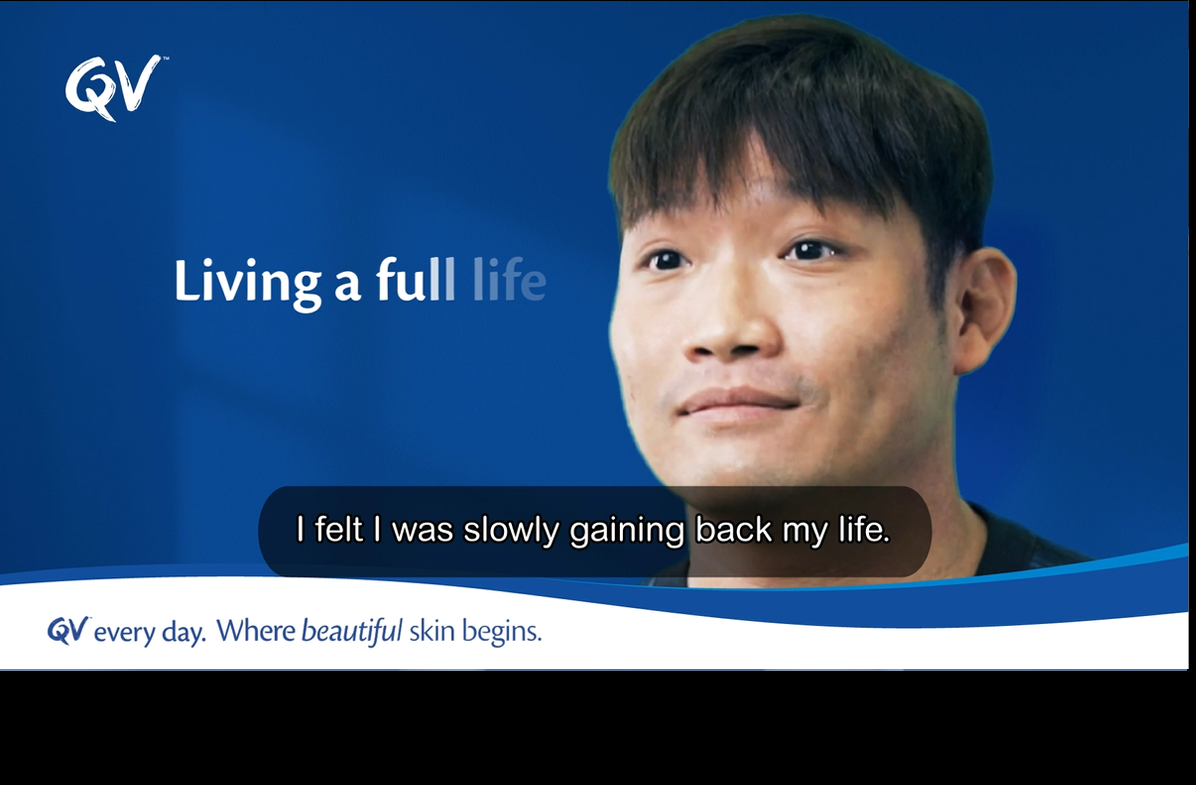 Edwin's journey to improve his well-being, and to continue doing the things he enjoys most. 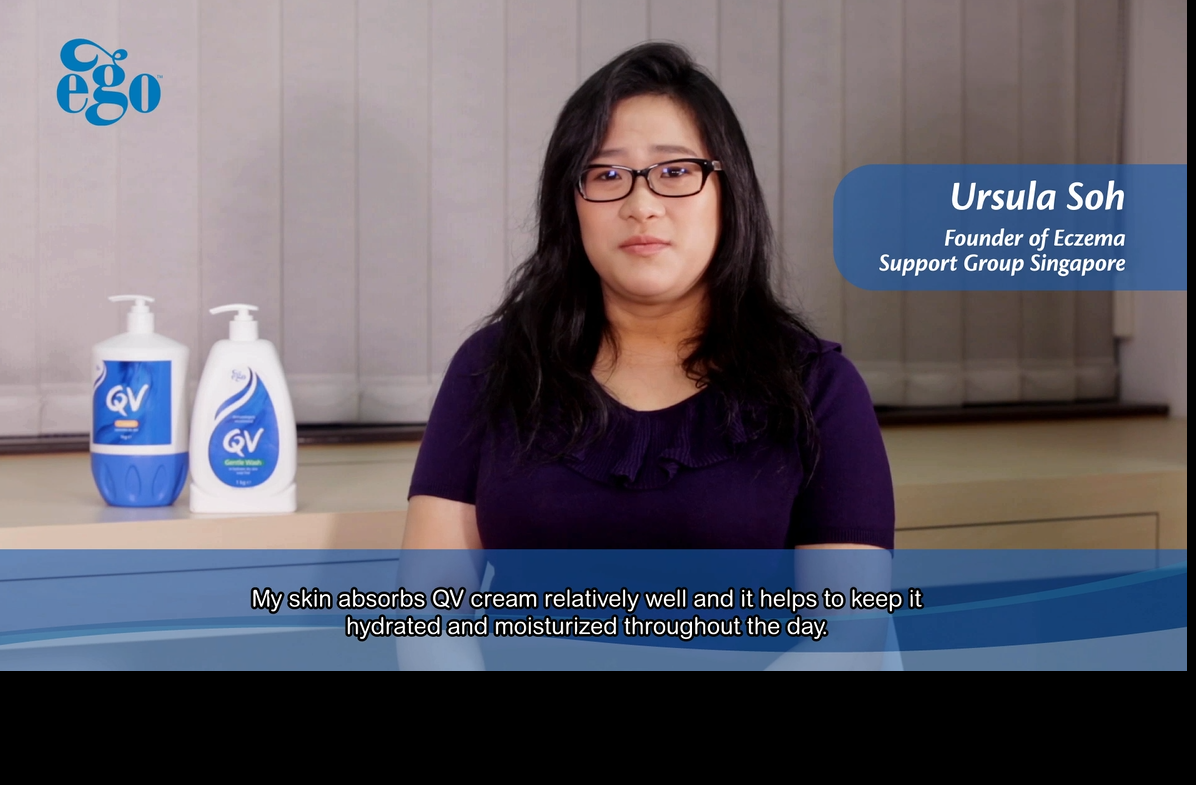 Since Ursula discovered QV, her skin is more moisturised and hydrated throughout the day.

Imagine a life growing up and worrying about dirtying couches with your flaky skin; being told to forget about public-facing jobs; and even being denied a promotion because of your appearance!

For Edwin Tan, it was not imagination, but a sad and tough reality. What began in primary school progressively worsened when he entered his teens and began secondary school. His eczema-prone skin irritated his friends’ parents, and exam periods were difficult to bear due to poor sleep from dry and itchy skin.

Despite growing up with dry, sensitive and flaky skin, Edwin was finally found to have eczema-prone skin in the final year of National Service. He was on the receiving end of sarcastic remarks, and unsolicited advice about how to get better, which included so-called miracle cures and detox diets.

During his early work years, he struggled to perform in the office, and he skipped social events.

Life turned around for this eczema-prone skin warrior when he decided to understand his skin better. He sought advice from dermatologists and adopted a careful skincare regime comprising skincare products that are most suited to his skin.

Edwin used gentle skincare products like soap-free QV Gentle Wash, which is free from fragrance, colour and other common irritants that hydrates his skin even during shower. He applied QV Moisturising Cream regularly to moisturise his skin, and to prevent itching and flaking caused by the dryness.

Edwin now knows that he has control over his skin. He is aware that there is no cure to eczema-prone skin, but he has learnt to manage it. Rising above his struggles, he is on a journey to improve his well-being, and he continues doing the things he enjoys most.

Waking up and seeing her bed covered in skin flakes left Ursula Soh, founder of Eczema Support Group Singapore, demoralised and sad. When she didn’t get a proper rest at night and didn’t know how to cope with eczema-prone skin, she felt frustrated and grouchy. Living with such discomfort can be an emotional struggle.

Instead of giving up and letting her skin problems get the better of her, Ursula decided to channel her frustration into learning how to take care of her skin. She also found the energy to create a forum where eczema-prone skin sufferers can come together to share their experiences and support each other.  Her closed group community -  Eczema Support Group Singapore | Facebook on Facebook has closed to 3K followers sharing their daily struggles with eczema-prone skin and how to manage this condition better.

How a two-year health ordeal helped Priscelia rediscover herself and what matters most to her:

"I couldn't recognise myself in the mirror because I was no longer me. It was mentally torturing."

These were the very words local Mediacorp actress and TV host Priscelia Chan used when describing her two-year ordeal with eczema-prone skin. During this time, the star of 'The Journey: A Voyage' and Best Supporting Actress nominee in the Star Awards 20th Anniversary and 19th Asian Television Awards had to give up wearing make-up, and worse still, her passion and career - acting.

For someone who had never suffered from skin problems, the diagnosis of having eczema-prone skin came as a real shock. It began during a period when she was dealing with a lot of stress resulting from filming two emotionally draining roles, an imbalanced diet and grieving the loss of a loved one. It was then that she noticed signs of eczema-prone skin on her face.

She felt like she had lost everything - her looks, her career, and even her husband. She had to deal with not just the discomfort of this skin condition, but also the emotional struggle of 'losing herself'.

Thankfully, Priscelia realised she needed self-belief, a balanced diet, sufficient exercise and rest - and of course, skincare products that will help her skin become more moisturised and hydrated.

Protection for dry, sensitive or eczema-prone begins in the shower. Because of her skin condition, the soap-free QV Gentle Wash - which doesn't lead to dryness - was the right choice. To hydrate and moisturise her dry and eczema-prone skin, Priscelia uses QV Cream, which also help relieve itching and flaking caused by the dryness. She loves the fact that QV Cream is not greasy like other moisturisers which made her skin feel sticky and uncomfortable. Both the QV Gentle Wash and QV Cream are free from colour, fragrance and other common irritants.

Since discovering QV Gentle Wash and QV Cream, Priscelia's skin has stayed more moisturised and hydrated, and they have  helped her on her journey towards recovery and being her cheerful and happy self again. 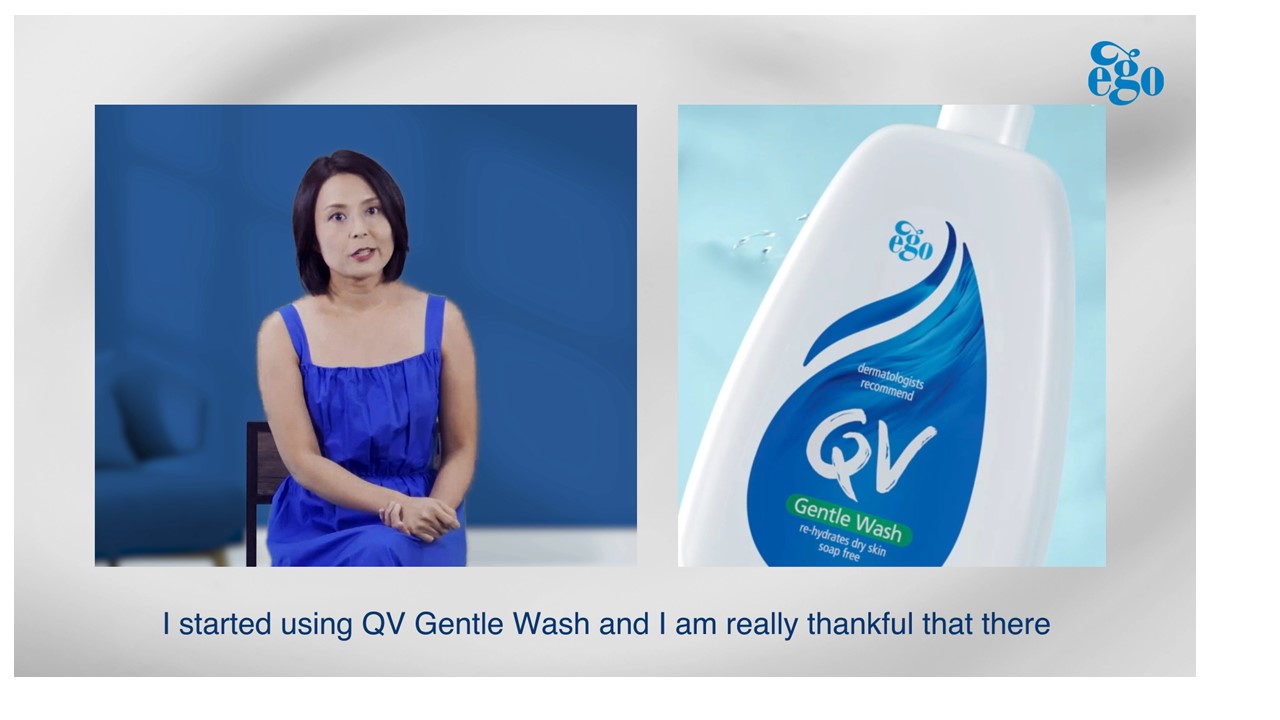 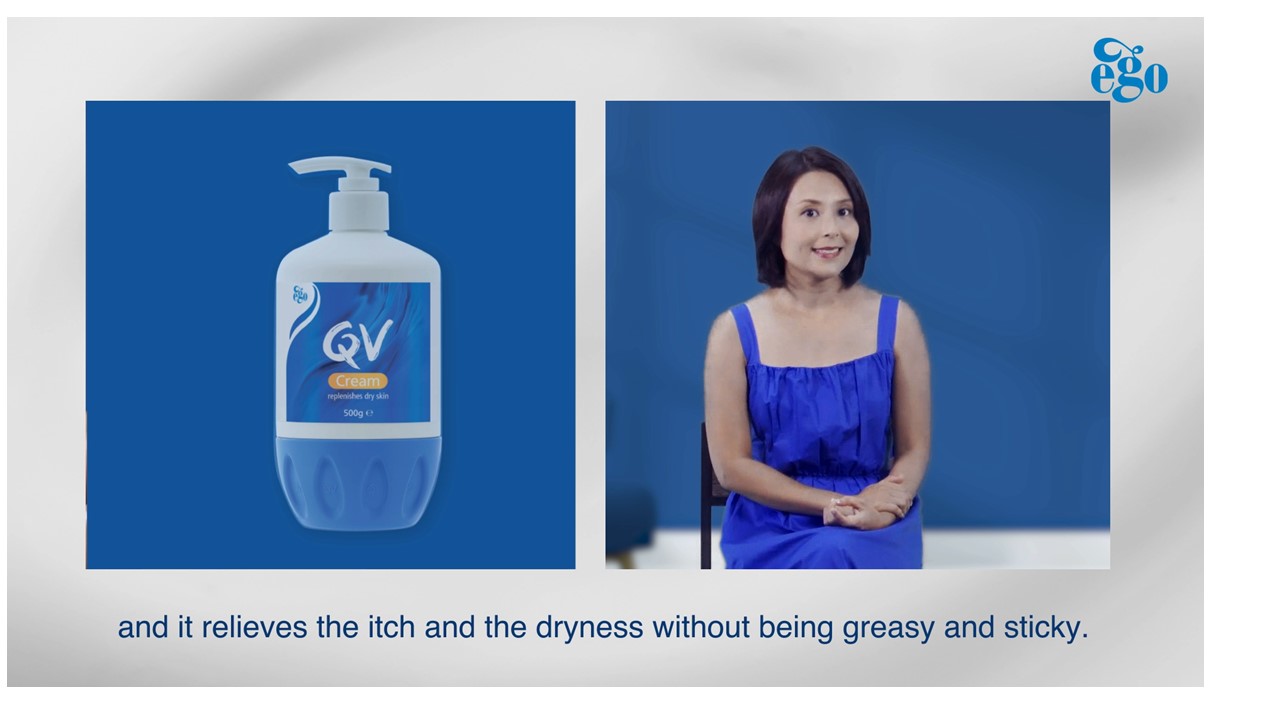 QV Gentle Wash is a soap-free, pH balanced wash that contains 15% glycerin and is free from colour and fragrance. Its soap-free formulation does not strip away the skin’s natural protective oil, leaving the skin hydrated even after shower.

QV Cream is powered with 5 moisturising ingredients that help boost skin hydration by around 30% over 24 hours*. QV Cream helps lock in moisture for a full day’s hydration, it also helps relieve flaking and itch caused by dry skin conditions. Its pH balanced and low-irritant formulation that is free from fragrance, colour, lanolin and propylene glycol, makes it very gentle and suitable for dry, sensitive or eczema-prone skin.